THE UNIVERSE IS AT WAR

Battle for the fate of the universe in this seven-player board game based on the  Galaxy Angel and Project G.A. universe first written by Broccoli in the year 2000.
Experience the loss, sadness, happiness, fear, joy, triumph, trust, betrayal, laughter, and even love as the commander or a pilot of the Angel Brigade, or serve as moderator for the game as the Fate of the Universe.

One of the most popular science fiction mecha universes from Japan is crossed with the reality of the Trump Administration from America in a race to recover The Lost Technology, mysterious items from the past that hold unknown powers.

- fun for all ages and genders

- five- to seven-player party game based on six-sided dice

- themed based on Galaxy Angel universe and the Trump Administration

- play as a pilot, commander of the brigade, or game moderator 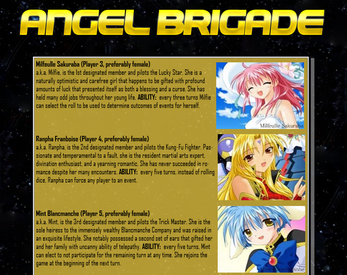